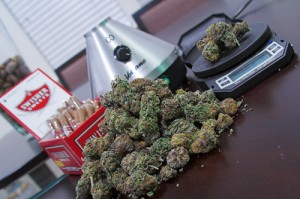 When I smoke Weed then I smoke it in a joint. I mix up the Cannabis with tobacco and role it up. Some call this a Spliff others call it a joint and i've even heard of it being called a zoot 🙂

I actually started to smoke cigarettes long before I was introduced to Marijuana, fortunately I managed to give up cigarettes about 2 years ago but I have continued to use tobacco in my weed spliffs.

Smoking Weed With A Volcano Vaporizer

When I gave up smoking cigarettes I was introduced to the Volcano vaporizer. I actually saw the vaporizer and used it for the first time in a Amsterdam coffee shop (Barnys farms,if im not mistaken)

I had a couple of bags and thought I liked it. As soon as I got back to my home country I ended up buying one. They are a little expensive but the quality reflects the price tag.

2 years Later, How is the Volcano vaporizer doing?

It's actually in almost like new condition but there is a very good reason for that. It gave me a very dry throat 🙁

Every time I would sit down to use the vaporizer I would find it to irritate my throat. It was the dryness of the vapour that was the problem. I tried all sorts of things. Sipping water before and after and I even tried to mix the herb with mint leaves hoping it would give the vapour a little more moisture. I finaly gave up and packed up the Volcano.

But a few days ago while I was browsing one of the Cannabis forums I decided to join and make a post to ask users for any help. One of the posts pointed to using a bong or pipe to inhale the vapor through and thats when I remembered that i packed the volcano away till I was able to get an attachable bong to work with it.

Take a look at the Video below showing how to smoke weed using your Volcano vaporizer attached to a bong for less irritation.