The First time I smoked weed was in a spliff of super skunk and it was not a great experience. I threw up and didnt like the buzz. It made me sick and I didnt try smoking weed again for about 1 year. 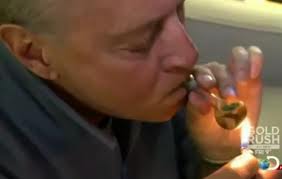 After 1 year I smoked Marijuana again but this time in a pipe. I found that the buzz was much cleaner and was rather fantastic. After which smoking cannabis was done on a weekly bases.

See the video below on smoking weed for the first time –

The user is 66 years old and a new marijuana patient, he has been prescribed Cannabis for back pain, depression and to replace multiple pills. It's his first time smoking weed and does it in a pipe. The patient acctually burns the bottom of the pipe instead of the actual Bud. Just goes to show how new he is.